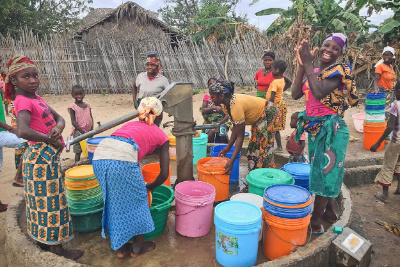 Mozambique is suffering from a large amount of poverty and a severe water crisis with approximately half of its people below the poverty line and being deprived of access to clean, safe water. A shocking 75% of its people do not have access to adequate sanitation.

Due to the lack of development here, it has meant that the people still have not been able to access clean, safe water. Those in Mozambique’s rural areas are the most greatly effected by the water crisis. There are several water sources across Mozambique, however many of them have broken down or do not provide clean water. The major reasons for the breakdown of these current water sources include: poor maintenance systems, a lack of spare parts and a continued reliance on old, unclean pumps. Mozambique do not have the capital or resources to build and maintain water sources which provide a constant stream of clean water to its people.

Due to the lack of accessible water sources, a large number of Mozambique’s rural population rely on natural water sources (such as ponds, rivers and hand dug wells). With Mozambique’s recent lack of rain fall and prolonged periods of drought, many have not been able to rely on these natural water sources. This has resulted in communities having to travel greater distances to access water, putting available water sources under greater pressure. The need to travel greater distances to search for water is resulting in many children dropping out of school or regularly being absent. They are having to spend their days walking miles to find water instead of being in the classroom. Diseases are also a lot more common during drought periods. Droughts result in a reduced amount of drinking water leading to a lack of hygiene and sanitation. This causes diseases to be more easily spread.

Water is crucial for the growth of Mozambique’s economy. Agriculture contributes to over a quarter of Mozambique’s GDP making water necessary to maintain the country’s agricultural production. Water is also vital for Mozambique to grow crops to feed its population. Due to the lack of water, a huge amount of crops have died, resulting in the people going hungry, many have even become starving.

Mozambique’s water crisis is a serious problem. Without clean water people are unable to live a healthy lifestyle!